Pete was my first rescue pup and the first dependent I ever had. I was his guardian and protector and loved him with all my heart.

Early one Sunday morning, while out for a walk, I let him down. We had picked up some breakfast from the bakery and began our normal route home. A few minutes in to the journey I realized I had forgotten margarine. We turned back to the store and picked up a few more things then for a change we took a different route home.

Only several hundred meters from home the plastic carry bag with the baked goods and margarine broke, spilling out on to the sidewalk. As I knelt to gather everything back in to the torn bag, I switched the lead from my right wrist to my left. In this split second he bolted on to the road and was hit and killed by a passing car that never stopped. It was the only car we had seen all morning as it was before dawn in a quiet neighborhood.

From that point on everything would change. I would replay in my mind the series of events and decisions that lead to Pete’s untimely death. Had I left home five seconds later? Had I remembered the margarine? Had we simply returned home on our normal route? I would not have lost my boy that morning. Many years later I can see this event lead me to where I am right now and I am where I am supposed to be.

After the initial brutality of grief subsided Chloe pictured here came in to my life and has been by my side for the seven years since.

Pete will live on as a continued inspiration to do what is right for all the animals that share this planet. 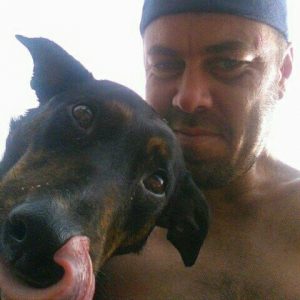