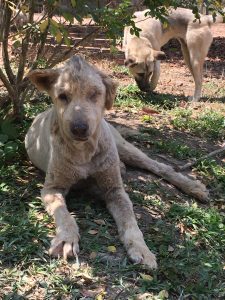 Responding to a call, Ryan collected Ragnar and carried him into Pete’s Mission. It wasn’t his first visit. This time he was in such a bad state, with his body infested with maggots and he was so weak he couldn’t walk. Fighting back tears we believed we would be caring for him during his last days.

Ryan treated his wounds with medication and 2 of his volunteers, Felice and Yvette set about the lengthy process of cutting away his fur and flushing out the maggots.

He was then treated on a daily basis and given lots of love and care.

His weakened body responded and bit by bit he gained his appetite, his strength and his attitude! He was able to come out of his sanctuary where he had been recovering and mixed with the other dogs.

He’s a Survivor. He’ll not be returning to where people tried to look after him but were unable to. Looks like he’s another chap who will spend his retirement at Pete’s Mission unless somebody who’s reliable can adopt him!

Princess Chao Ying came to us in January 2020. Suffering from a bloodparasite she had…

Ryan found Sherry fending for herself, living in the middle of an industrial area filled…

Pickle was left in a box at a temple in November 2019. Ryan was contacted…